SEO Woes: What to Watch Out for After a Google Algorithm Update 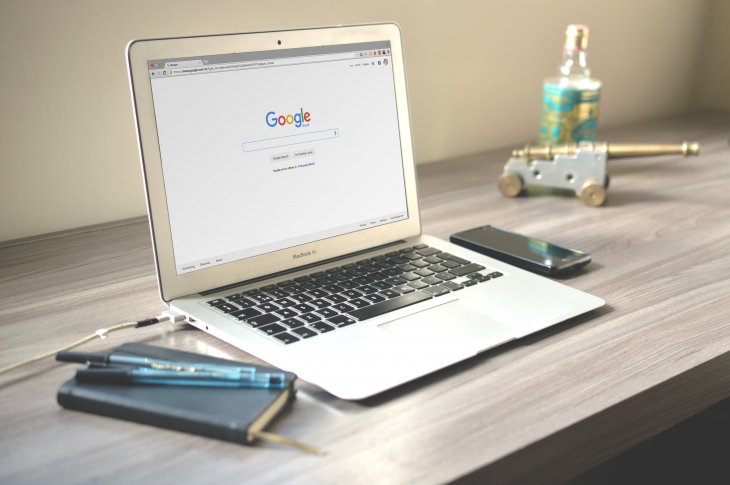 In the rare instance when Google issues a warning about an impending algorithm update, webmasters the world over are sent into a panic. The impacts of such events are incredibly challenging to predict, let alone making the necessary preparations.

Given that in many cases Google supplies little to no notice that an update is about to occur, many businesses are left completely unaware of the ramifications to come until it’s too late.

That said, not all of Google’s updates are cataclysmic events. Back in 2017, Google’s Gary Illyes confirmed that the company has three updates per day, on average.

Even so, Google has recently been pushing out significant updates every few months, dubbing these alterations “core” algorithm updates.

While there have been other updates since (more on that momentarily), the question remains of what actions site owners and online retailers should take when one of these algorithmic adjustments comes down the pipe.

For those looking to mitigate harm to their sites when Google decides to shake things up, here is what you need to know.

Given that keywords are still one of the core pillars of ranking pages as they relate to specific queries, the place to begin is with analyzing which potential keywords a site may have gained or lost rankings for as a result of the update.

Analyzing traffic and positions is the only viable tactic for understanding how a site has been affected by an algorithm update. While numerous tools can be utilized to dig into these data points, Google Analytics and SEMrush are recommended.

To establish pages that have been impacted (positively or negatively) by a Google update, begin by finding out exactly which destinations experienced fluctuations.

To do this, log in to Google Analytics and navigate to Behavior > Site Content > All Pages. From there, set the segment to Organic Traffic and establish the date range from the time in which the algorithm update impacted the site’s traffic.

Here is an example of what it would look like to compare organic traffic from one week to another:

You can also break it down page by page: 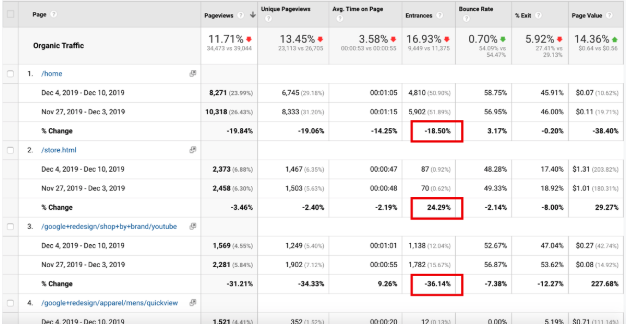 After pulling up the relevant data, it is essential to hone in on entrances instead of other metrics like sessions. The reason for this is that the difference between entrances and sessions is, as Google states:

Put more simply, entrances are the number of times in which visitors entered a site through a particular page. When analyzing keyword fluctuations, changes in entrances means that these pages are the ones that experienced some sort of alteration as the traffic entering from the search engine has changed.

Next, sort the data by organic entrances in descending order. From here, retailers can gain a view of which pages were most heavily impacted, positively and negatively. These URLs should be copied and pasted into a spreadsheet.

Finally, move over to SEMrush to find which keywords have driven the changes by obtaining the keywords indexed within the tool for a given webpage. Cross-referencing this information will enable site owners to definitively understand which keywords were lost or gained as a result of the algorithm update.

However, this can be a somewhat complicated task for retailers to manage on their own. Therefore, when an algorithm update is implemented, it is wise for site owners to reach out to an eCommerce SEO consultant for guidance or assistance.

That said, when sifting through this data, if important rankings have gone down, look at the pages that now rank on the first page for specific queries. It is possible that Google is now showing more informational pages rather than transactional.

In October of 2019, Google announced the latest update to its algorithms, dubbing the update BERT.

BERT, an acronym for Bidirectional Encoder Representations from Transformers, is different from most algorithm updates in that it does not impact how pages are ranked, per se. Instead, the BERT update has altered how Google understands searcher queries.

In the announcement of the update, Google exemplified BERT as follows:

“Here’s a search for ‘2019 brazil traveler to the USA needs a visa.’ The word ‘to’ and its relationship to the other words in the query are particularly crucial to understanding the meaning. It’s about a Brazilian traveling to the U.S. and not the other way around. Previously, our algorithms wouldn’t understand the importance of this connection, and we returned results about U.S. citizens traveling to Brazil. With BERT, Search is able to grasp this nuance and know that the very common word ‘to’ actually matters a lot here, and we can provide a much more relevant result for this query.”

If sellers notice that their transactional pages have dropped after an update and have been replaced with informational destinations, it is advisable to look at the keyword for which the new content is ranking and to aim to produce similar content offerings.

Carefully analyze the content that fell alongside any content that rose and try to establish why Google prefers this content over the (effectively) demoted pages. From there, aim to outrank the competition with a congruent piece.

By generating comparable yet more valuable content related to the keyword in question, retailers can potentially recapture their rankings. Moreover, given that the transactional pages have dropped out of view for the keyword, it is wise to include a link to that page as a solution contained within the content to help elevate the product page’s standing in the SERPs by passing along any potential SEO juice the page earns.

Moreover, retailers who must craft informational content under the BERT paradigm are wise to utilize the skyscraper technique as a means of outranking the new top dog for that keyword.

However, before getting too deep into the weeds on potential ranking tactics related to algorithm updates, it is best to look at what the experts are saying.

Following an algorithm update where retailers must figure out what to do after a Google ranking drop, it is vital to head to credible SEO sources that can help make sense of what just happened.

Start by checking out the Google Webmaster Blog to consume any available information the company may have posted relating to the update. However, don’t stop there. It is possible that Google will provide insight on what the update was meant to target, but it will likely not mention potential remedies for those impacted.

For that kind of information, sellers should seek out other popular resources such as:

The fact is that algorithm updates can be unnerving. However, those who abide by today’s SEO best practices such as crafting consumer-focused content, earning credible and authoritative backlinks and optimizing backend components are likely to suffer the least.

However, even when following all of Google’s advice, things can turn on a dime, leaving retailers scrambling to recover. In these instances, the best course of action is not to panic.

Start by diving into the underlying keyword data to establish which pages have been impacted. Then, analyze the pages that moved up the SERPs, consume relevant content from reputable sources to figure out precisely what is going on and develop a plan of attack to regain any potentially lost ground.

Google updates can be rough, but by following these simple steps, most sites can make it through the shakeup just fine.

Ronald Dod
Ronald Dod is the Co-founder and Owner of Visiture, an eCommerce Search Marketing Agency that focuses on Search Engine Optimization, Pay Per Click, and Google Shopping management for eCommerce businesses. His passion is helping eCommerce merchants and marketing professionals navigate the SEO & Paid Search landscape and put together a plan to increase the bottom line through new traffic and conversions.
See more posts from this author
Previous How to Optimize Your Lead and Sales Funnel for 2020
Next Launch Your Start-Up Effectively With These Mobile Strategies