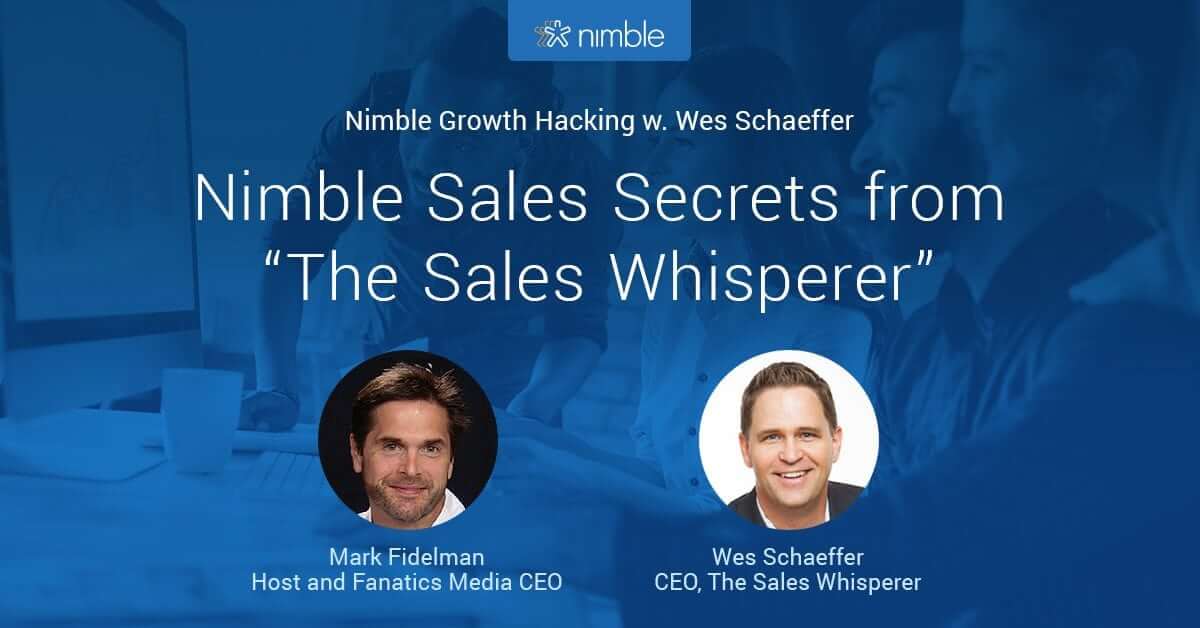 Time has never been a friend to any salesperson. Just ask sales expert Wes Schaeffer.

While social platforms like Twitter, Facebook, LinkedIn, and others are a goldmine for uncovering valuable leads and prospects, it’s no small task to sift through various profiles in order to identify the right people and uncover email addresses, company information, and relevant icebreakers.

Wes, CEO of The Sales Whisperer, recently sat down with Nimble Growth Hacking host Mark Fidelman to discuss the time-consuming challenges of social selling and share his most effective and expedient methods for generating leads and driving sales using Nimble.

About: Wes entered the sales force in 1997 and has forged himself a respected name in the industry, serving as a keynote speaker, inbound marketing authority, author, and CEO of The Sales Whisperer, an inbound marketing agency that focuses on sales training and increasing business revenues.

Although almost everything is moving toward digitalization, Wes has found that techniques like cold calling and direct mailing are still very much alive and flourishing.

Since Nimble sits on browsers alongside other extensions, the tool is ever-present and capable of presenting social insights and engagement history regarding potential sales prospects from various destinations, including Twitter, AngelList, Facebook, LinkedIn, Office365, Gmail, and many others.

With a single click, Nimble presents the contact’s LinkedIn, Twitter, email address, potential work and cell phone numbers, location, company, title, and tons of other data surrounding the person and the organization they work for. Once Wes discovers a person’s interests, hobbies, or other personal details, he finds common ground upon which to build a relationship, and he can quickly tag and add contacts into Nimble for appropriate follow-up.

For example, Wes recently received an email from an individual in Europe who wanted to be on his podcast. Unfortunately, his website is not in English; this means that organizing an appearance could prove to be rather problematic on several levels.

Wes describes the power of using Nimble this way:

“When someone emails me, I can use Nimble to immediately figure out if I want to connect with that person and how to build a relationship based on our common areas of interest. I can also look up his or her contact details using Nimble Prospector. Without Nimble, I’d easily spend three or four times as long.”

Using Nimble, Wes was able to quickly identify the gentleman’s social profiles, including his Facebook page. Through this portal, Wes discovered that the emailer does Brazilian jiu-jitsu. Wes is a passionate Brazilian jiu-jitsu practitioner, so instead of deleting the gentleman’s email, as would have been the case without the ability to qualify him, Wes instead reached out to him about appearing on his show. The ability to quickly discover their common bond of jiu-jitsu is what enabled this connection to happen.

Then, Wes added the emailer’s information to Nimble and tagged him under “Brazilian jiu-jitsu practitioner,” “sales training,” and “podcast guest” to ensure he would follow-up in an appropriate manner. This process took Wes all of 35 seconds to complete; and he does this several times an hour via his inbox.

“Every single email that I get from anybody, I’m hovering over it, seeing who they are, seeing if I want to connect with them, and how to build a relationship; how to connect with them. Is there something unique? Because, in reverse, I can do the same thing. If I see that we grew up in the same part of the country or we were both in the military. . . Find something in common, that will break the ice every single time, regardless of how high up that prospect is in their company.”

While Wes’ example is essentially a sales success story in reverse, the implications are clear: Nimble provides the information and digital trail needed to easily establish a connection with a prospect so that you can connect and foster a relationship. Not only does this system reveal the organic commonalities required to make an authentic connection, it also does so in real-time with no additional research required.

This is of paramount importance. Wes puts it this way:

Wes illustrates that Nimble’s simply smart social relationship manager is quite literally a game changer. The information provided about a single lead is so personal and instantly attainable, it gives you all the ammunition you need to grow your revenues, and vastly extend your valuable network.

If you want to connect with Wes for more information or seek his advice on growing your business, you can leave a comment on this post, reach him at his website, The Sales Whisperer, email him at [email protected], or find him on Facebook and Twitter.