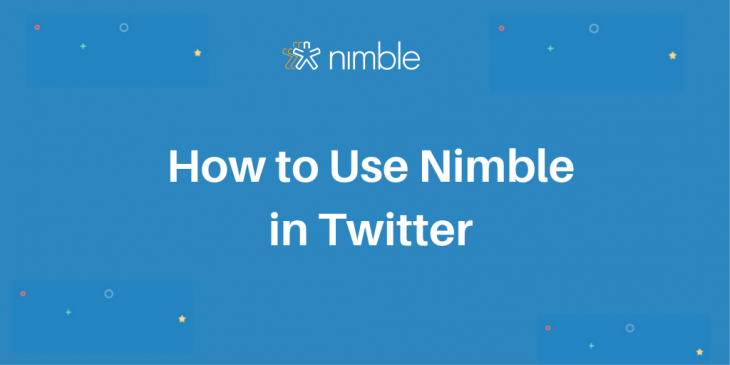 If you are a Nimble user and use Twitter as a part of your social media business strategy, the tips in this blog post might come in handy. Nimble has a direct integration with Twitter; once you connect your Twitter account to Nimble, all your tweets and direct messages will automatically appear under the Interactions tab in Nimble.

You will also be able to send tweets and direct messages straight from the main app as well as from the Nimble Prospector browser extension.

What is Nimble Prospector?

Nimble Prospector is a browser extension that gives you the ability to quickly access and update existing contact records, as well as to create new ones when engaging with people on Twitter. You can download Nimble Prospector here. It works within your favorite browsers and allows you to use Nimble everywhere you work, including on any social platform, in your inbox, and within your most-used apps.

If you are using Twitter natively, or via a social media listening tool like AgoraPulse, you can use Nimble Prospector to add new prospective customers or influencers into Nimble. It’s also very easy to update existing contact records and take actions like creating notes, tasks, deals, or logging activities. 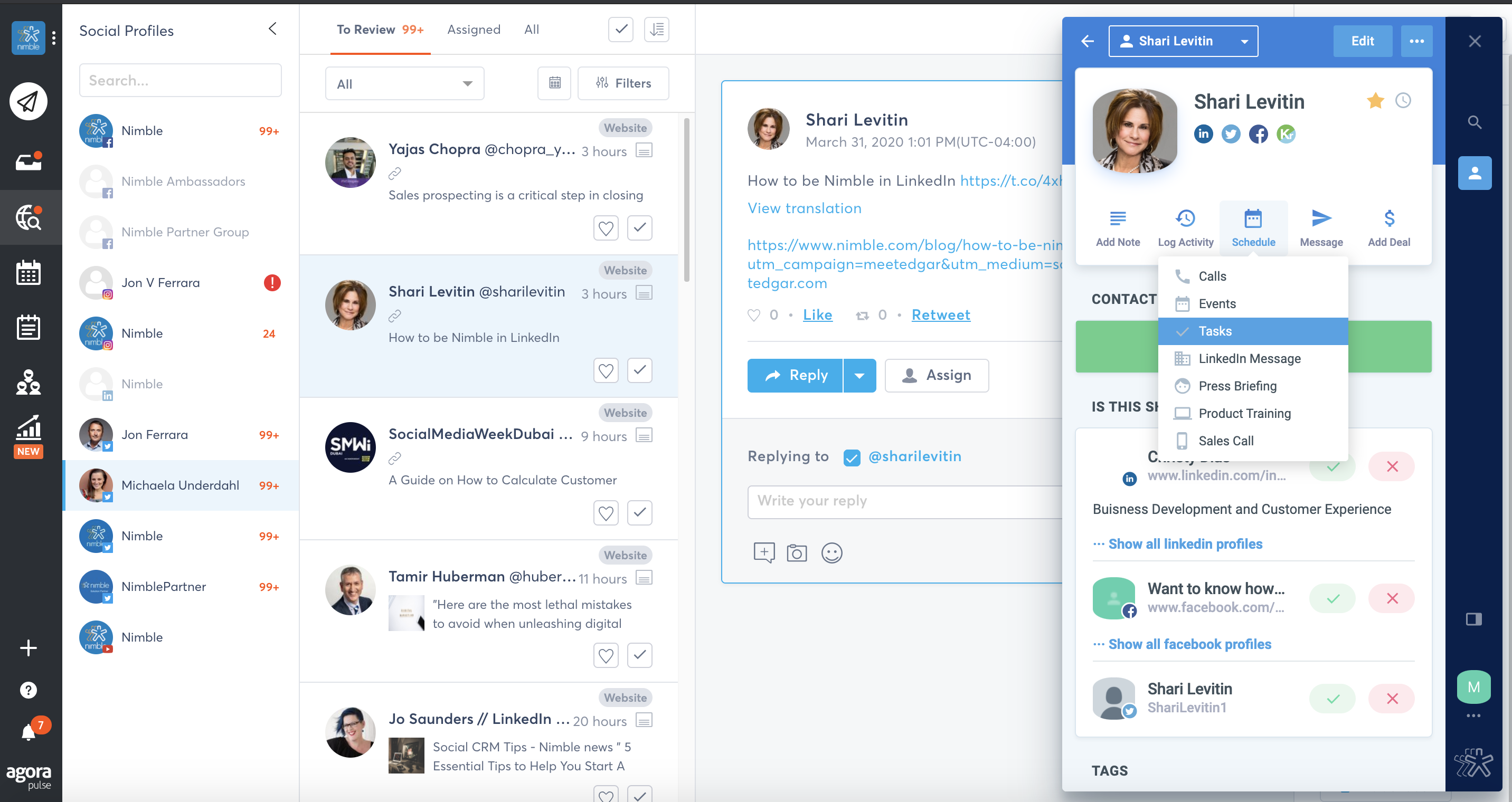 We all know that if we don’t write things down or take care of them right away, it’s very easy for follow-up activities to fall through the cracks. Nimble Prospector will make it easy for you to create new contact records for prospects and to schedule the next steps, including assigning a task to one of your team members, scheduling appointments, or sending emails. 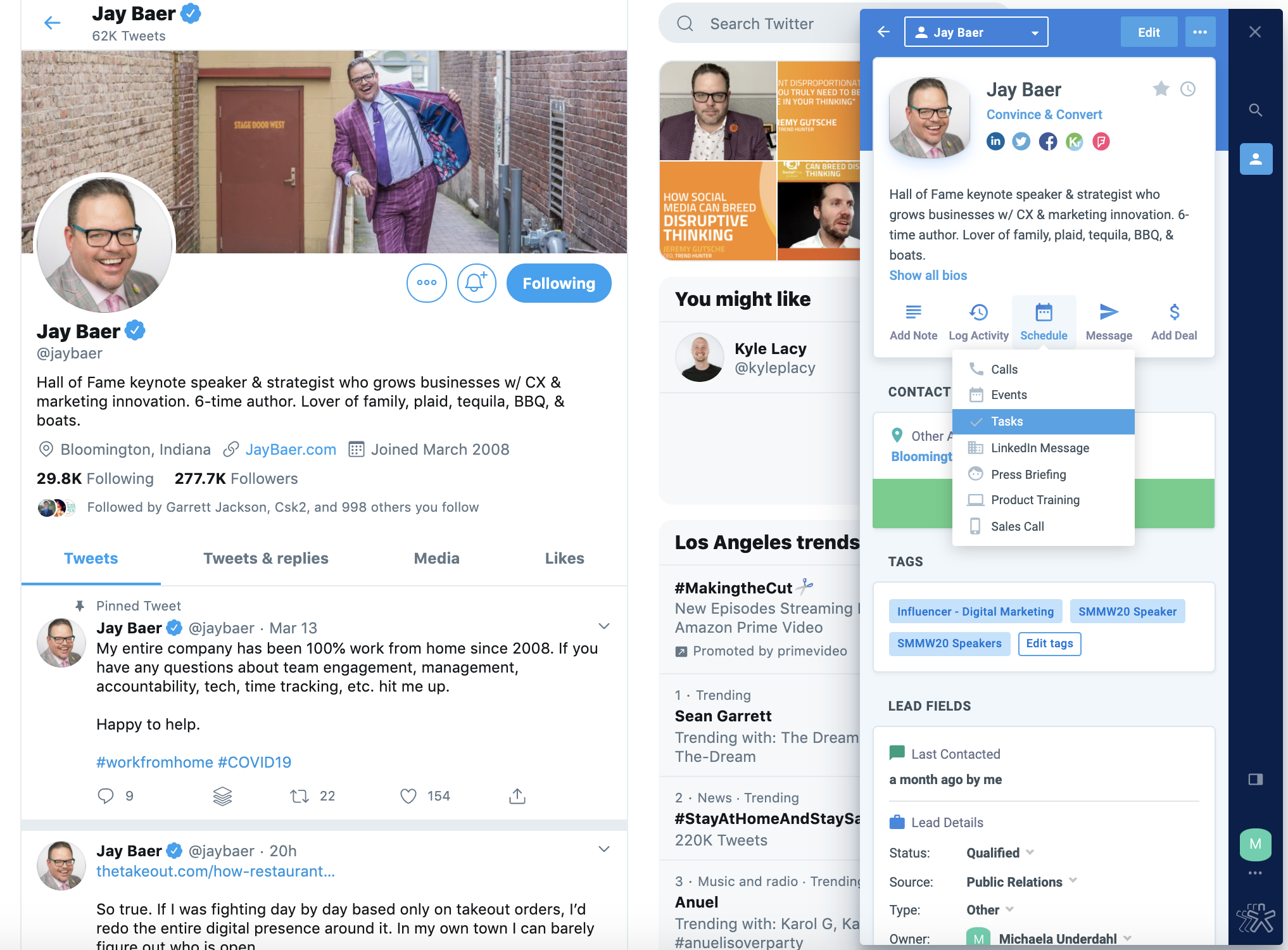 Let’s pretend that you would like your assistant to send Jay a case study you two just discussed over Twitter. You can quickly assign your assistant a task by simply hovering over Jay’s Twitter handle. Nimble will automatically surface his contact record (or help you create it if you don’t have Jay in your database yet) and will allow you to quickly assign a task to any of your team members.

Nimble will allow you to fill in all the details, like the specific due date and task description. You can also relate the task to an existing deal or apply a tag so you and your team can organize tasks by projects. This is a great way to separate tasks and stay organized as well as to prioritize. 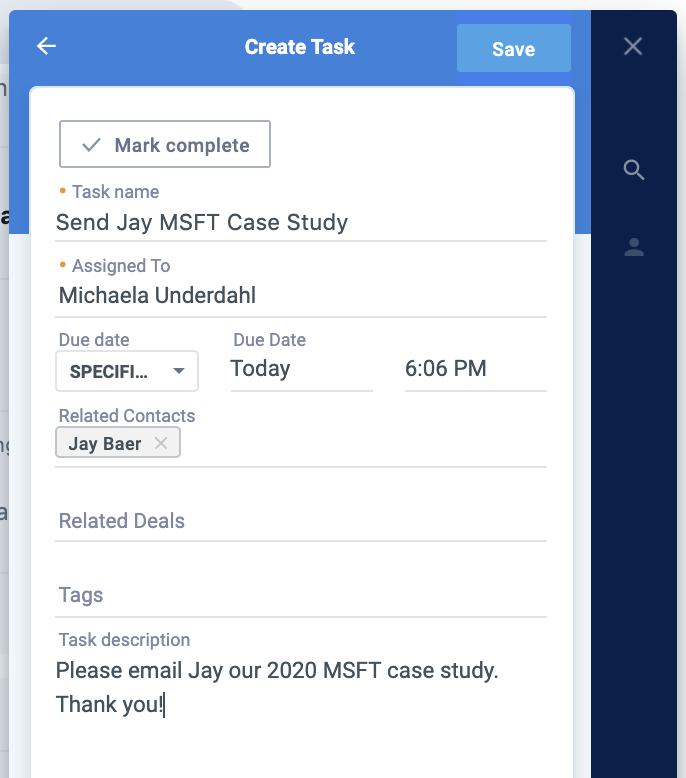 The reason why we recently rebranded our browser extension from the Smart Contacts App to Nimble Prospector is because of the feedback we’ve been getting from our users about the way they use it is for prospecting. You can hover over any name anywhere (not only on Twitter) and update existing and create new contact records. You can do so when checking your notifications on your homepage, when prospecting people that are retweeting and liking your content, or on any webpage. 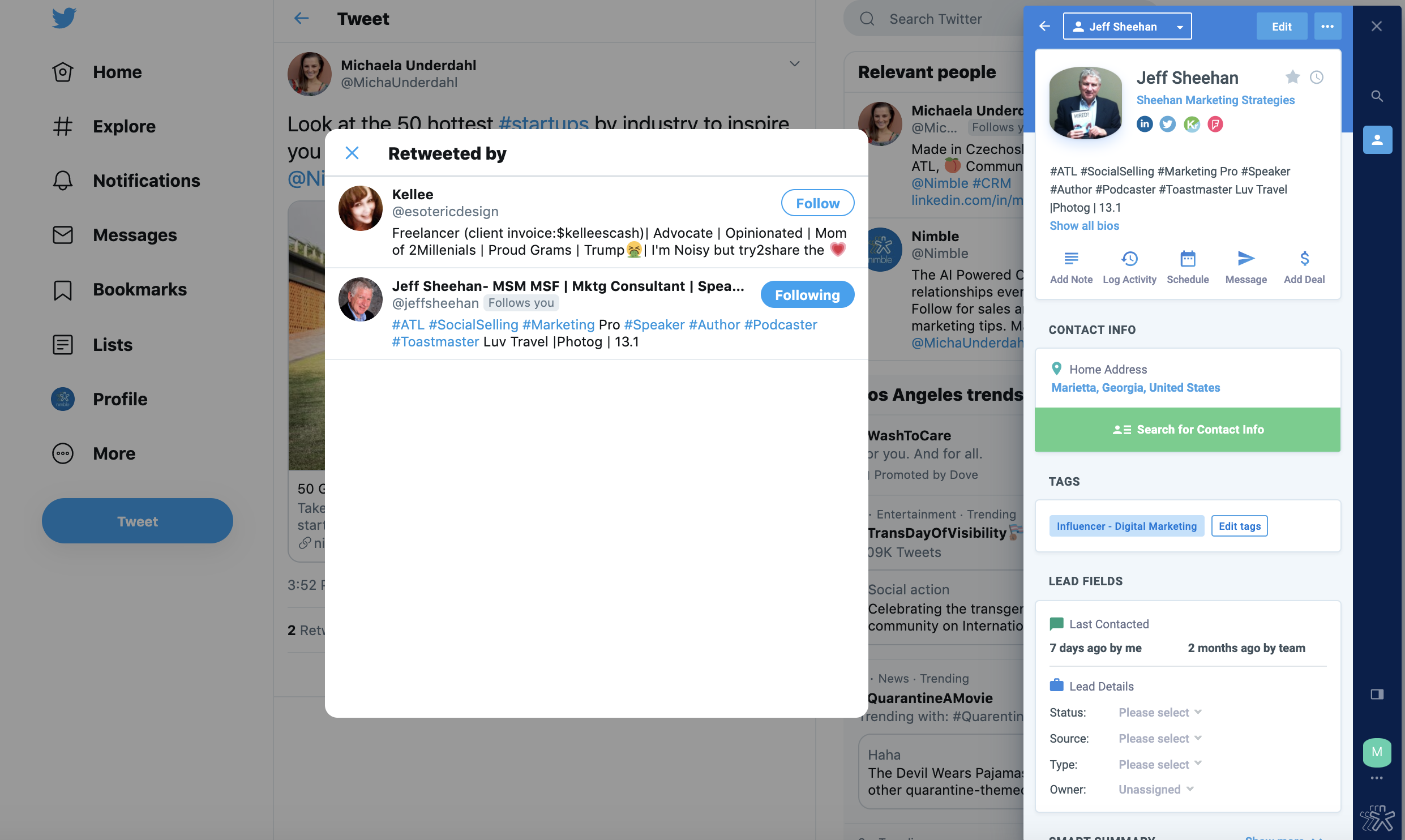 If you are a power user of Twitter, you are probably aware of Twitter Lists. If you are not familiar with them, we highly recommend using them. Twitter can be a messy place; Twitter Lists can help you to curate lists of people that you want to focus on. They can be created as private and used to “spy” on your competitors (as nobody will be notified when added to a private Twitter List) or created as public (members will receive a notification). Public lists will be visible under “Lists” on your profile and other users will be able to subscribe to them.

There are two ways to import Twitter lists into Nimble (you can import any publicly available lists, not only those that were curated by you). The first way is to do it inside of the Nimble web app in Networks & Imports. After locating your Twitter account under Social Networks, simply click on the button that says “Import Contacts” and you will be able to select a Twitter list to import. Nimble will also allow you to attach a tag so you can easily locate the newly imported group of people.

The other way is to use import lists straight from Twitter. Navigate into your lists or lists of any person whose Twitter list you’d like to make your own, select a specific list, and look for a little Nimble button in the bottom right corner of your screen. This button will allow you to import the list and also apply a tag without having to leave Twitter!

If you have any questions about using Nimble, please let us know at care@nimble.com. We’d love to hear your feedback too!

Michaela Underdahl
Michaela is a Community Manager at Nimble. She is passionate about Customer Service, everything Social Media and growing our Nimble community. She tweets as @MichaUnderdahl.
See more posts from this author
Previous 5 Essential Tips to Help You Start A Digital Marketing Business
Next How to Choose the Right CRM System For Wellness Centers