A few weeks ago, I wrote a blog called “My 1-week Social Selling Experiment” about nurturing the relationships with my LinkedIn connections. I used LinkedIn’s “Keep in Touch” feature that tells you when your connections have trigger events like: 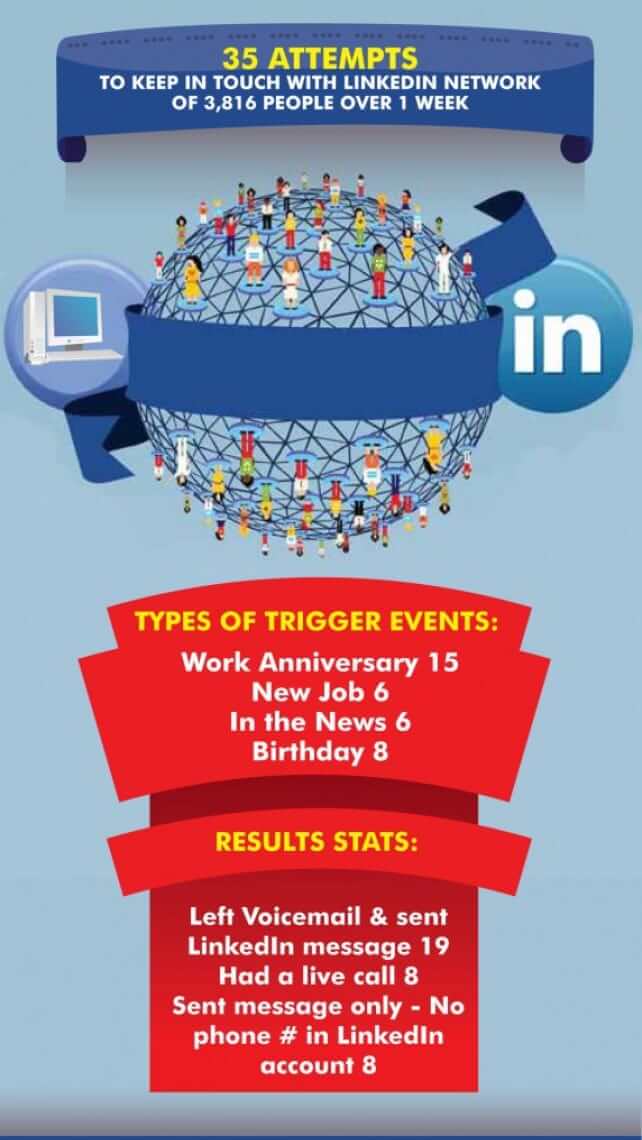 While clicking LinkedIn’s “Say congratulations” or “Wish them a Happy Birthday” button is an easy way to stay top-of-mind with your connections, I decided to take it one step farther and phone people them where possible.

I originally planned to call 20 people a day for one week. With the LinkedIn network of about 4,000 people, I thought it would be easy to pick 20 social trigger events each day. It turned out to be more difficult than I thought. I ended up reaching out to just 35 people over the five-day period. If they had a phone number, they got a call. If they did not answer, they got a voicemail and a LinkedIn message. If they did not have a phone number in their LinkedIn profile, they just got a LinkedIn message

There were a few surprises. First, I felt like I did not know some of my connections well even to phone them. Second, it takes a long time to make phone calls. Between making calls, having conversations, and sending LinkedIn messages, it took me 45-60 minutes every morning.

One the first day, Gerhard Gschwandtner, the publisher of Selling Power magazine, was highlighted in the news because of a partnership that Selling Power is doing with Jeffrey Hayzlett’s C-Suite Network. So, I picked up the phone and called the publisher of the country’s top sales magazine. He answered and he was intrigued by my experiment. As a veteran sales executive, he remarked on the often unanticipated directions that a real live conversation can go. Gerhard invited me to share the results in a short video that he is going to put on Selling Power TV. So, right off the bat, I gained a huge exposure bonus that would not have occurred if I did not pick up the phone.

Later I spoke to Ronan Keane, Senior Digital Marketing Manager for XO Communications. I was looking forward to phoning him because I was impressed with the social selling program that he initiated at XO. We had never spoken and since it was his birthday, I thought I had the ideal reason to surprise him with a phone call. It turns out he surprised me. Ronan answered the phone and said, “Let me guess, Kurt. You are calling to wish me Happy Birthday.” After I recovered from the shock (caller ID plus a lucky guess), I replied that, yes, I was and then I explained my experiment. Ronan agreed to be a guest on my social selling podcast.

Finally, I connected with another “birthday boy” that I had never spoken to before – Bill Belew. Bill is a digital marketing and content expert. I’ve been reading his blog for over a year and we had a great conversation about the role that content plays in social selling. We agreed to write guest blogs for each other.

My big take-away was that sometimes I rely on asynchronous, electronic communication too much and miss out on the richness of an live conversation.

If you want to build relationships with your LinkedIn connections, use the “Keep in Touch” section and scan it for two or three important ones to phone every day. If they don’t have a phone number, send a customized email message.

Let me know what good surprises you discover.