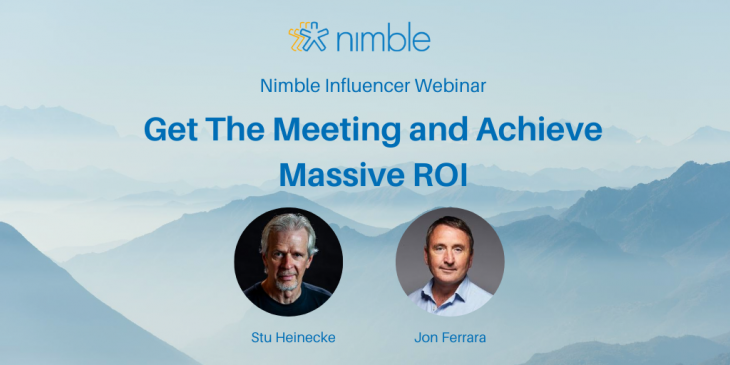 This ongoing series of influencer webinars is intended to help you become better, smarter, and faster. In this webinar, Nimble CEO Jon Ferrara is joined by hall-of-fame nominated marketer and Wall Street Journal cartoonist Stu Heinecke.

Stu believes that one meeting truly can change everything; you just have to be bold enough to make it happen. Whether you’re a sales development rep, a CEO, or somewhere in between — nothing happens without contacting the right people. It’s oftentimes difficult and sometimes impossible to break through to the people who can change everything.

Stu is here to give you a few tips and success stories on how you can use unique breakthroughs to land the impossible prospects. At the end of the webinar, Stu hopes you walk away with new ideas on how you can connect.

One Meeting Can Change Everything

All significant results happen because of the connections we make. However, connecting with people who can transform your business can be challenging. Stu suggests getting these people’s attention by finding unique ways to flip their impression of you. Rather than having your prospect be disinterested, get them to want to know you and your business.

The video above is an example of a contact marketing campaign Stu created for one of his prospects. He handmade a personalized striped cartoon multi-panel of a conversation about how great the prospect is.

For Stu’s first book, Drawing Attention, he interviewed the top 100 sales leaders in the world. He asked them, how do you break through to someone who seems impossible to reach? They shared their stories and techniques with him, but the thing they all were doing had no name. Stu ended up naming it “contact marketing.”

Contact marketing is a micro-focused campaign designed to create contact with high-value accounts and prospects, often with extremely high response and ROI.

The record he has witnessed was 65,500,000%. These numbers might be hard to wrap your head around, but those are the numbers content marketing produces. It’s because contact marketing campaigns are usually shared with other people from the prospect, which causes more people to respond to the campaign.

Stu hopes these four stories will draw some inspiration for you to use contact marketing with your dream clients. Contact marketing can come in different forms as long they are thoughtful and relevant to each prospect.

Dan reaches out to CEOs of companies that are in distress. One method he uses to break through to his prospects is by using visual metaphors.

He would call the business news every morning for stories of missed earnings estimates then finds a sword. These swords have an inscription and the CEO’s name on them. He sends it to the CEO in a beautiful wooden box with a handwritten note saying, “I noticed you lost a battle recently. I just wanted to let you know, if you ever need a few extra hands in battle, we’ve got your back”.

The sword is an example of a visual metaphor. It represents how Dan is ready to go to battle for you because he’s aware you’re struggling and is willing to sacrifice himself for you. Although Dan didn’t attach any of his business logos with this gift, this visual metaphor also reflects his brand and personal outreach.

Dan would spend thousands of dollars on these swords, but every assignment gets a turnaround engagement worth a million dollars. He even gets a hundred percent response rate with this contact marketing campaign.

Your contact marketing campaign doesn’t have to break the bank. Unlike Dan, Rick spent only $4 on a cupcake.

Rick is a commercial real estate agent and had one prospect that he really wanted to connect with. He was doing everything he could think of, but nothing worked. Until one day, Rick noticed his prospect’s birthday was coming up. He stopped by a bakery, picked up a cupcake, and headed over to the prospect’s office to drop it off. The receptionist was aggravated to see him, but as soon as she saw what was in the box, she grabbed the prospect he had been wanting. The prospect even apologized and had a meeting with him on the spot. After that meeting, he walked away with a two hundred thousand dollar deal.

A thoughtful gift is another excellent form of contact marketing. With Rick’s $4 cupcake, he was able to get a five million percent ROI.

Ryans’ story goes in a completely different direction compared to Dan and Rick.

One December, Ryan was tired of making phone calls with no one answering and wanted to try a different approach to getting his prospect’s attention.

He decided to hire a string of quartets and recorded them playing Christmas music. Before sending the video, he added an introduction with the prospect’s name then explained how they could focus on doing cool things for their prospects like the video. He then transitioned the video into the string of quartets. Ryan’s idea went so well they used it in the next few years for different occasions.

“When you personalize something, you’ve got to personalize that not only to the person but also for you” ~ Ryan O’Hara

Ryan’s perspective is that people are not companies — they are people. Stu believes the same thing, which is why he sends cartoons about each person.

Video is a brilliant device to break through to your hard prospects. Ryan’s video idea ended up with an 83% booked meeting rate. Even the CEO of Hulu sent it to CNN, which got the attention of all sorts of networks. The whole campaign cost $900 to set it up and spent $200 a month, and it produced an immediate $40,00 recurring monthly revenue.

When Dom graduated college, he was recruited as a summer sales development rep by a tech startup. Their strategy was to make 100 cold calls a day. However, Dom noticed they weren’t breaking through their prospects — not even a conversation.

One of Dom’’s friends recommended Stu’s book, How to Get a Meeting with Anyone: The Untapped Selling Power of Contact Marketing. The thing that Dom was attached to from Stu’s book was profile scrapes, which means sending something of great personal value to each person. He began researching to create a list of dream clients and started to reach out to them by practicing profile scrapes. He was immediately getting called back.

One of the people Dom reached out to was a prospect that no one in the SDR team could reach. He discovered that this prospect was really into falconry and bought the best falconry glove he can find. Once the prospect received the glove, he emailed Dom thanking him and appreciating the gift. However, he also explained that he isn’t a prospect for his service, but he introduced Dom to three other CIOs who he thought would be a better fit.

After one year of graduating college, Dom became a Sales Manager for a billion-dollar multinational company. All because of Stu’s concept of profile scrapes.

You got all this horsepower to point at someone, but how do you find the right people? What kind of profiling tools are out there? Not only to find prospects but to compile and cultivate your top 100 list?

Social media platforms give a wealth of information. However, connecting with someone on LinkedIn or any social media channels doesn’t create a genuine connection. It allows permission to open the door, but it’s not memorable. You have to be multimodal in your communication with the people you want to connect with; send a direct message, or get on the phone with them. What Stu does is send the most important people personalized cartoon cards and a handwritten note.

How to Get Started

If you do not have a Nimble account yet, we invite you to try it for free for 14 days.

Stay tuned for more product announcements as we evolve Nimble into the best CRM for Office 365 and G Suite teams.

Nedia Lamug
Nedia Lamug is the Community Manager at Nimble. She is an alumna of University of California, San Diego. She loves to crochet, run, and cook in her free time. Connect with her on LinkedIn and Twitter.
See more posts from this author
Previous 8 Easy Ways to Create Opportunities for Your Small Business
Next Assessing Your Brand’s Use of Social Media