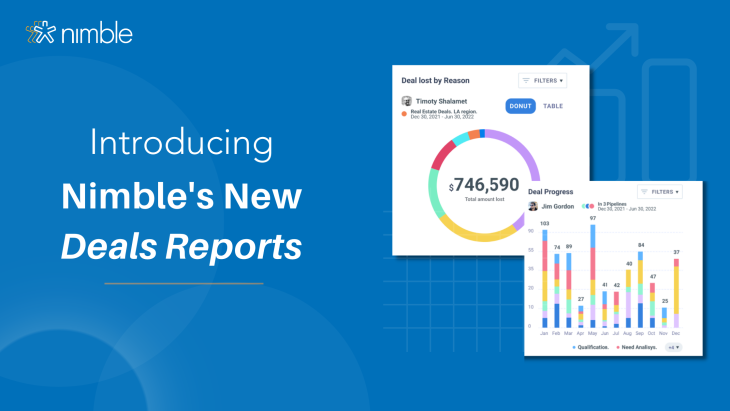 Our Nimble Product team has released many new and exciting features in 2022!

Today, we are delighted to share the release of our completely redesigned Nimble Deals Reports feature!

Nimble’s New Deals Reports were crafted for businesses that heavily rely on the utilization of Nimble’s Deal Pipeline feature. The New Nimble Deal Reports enable management to track their organization’s sales performance with ease. Nimble automatically pulls the information from Deals to help you save time and make better business decisions.

If you’ve read our last new Nimble Deals blog post, you already know about the fantastic updates made to Nimble’s Deals feature. Now, you will learn how your team’s activities in Deals are interpreted, analyzed, and displayed within our revolutionized Deal Reports Dashboards. 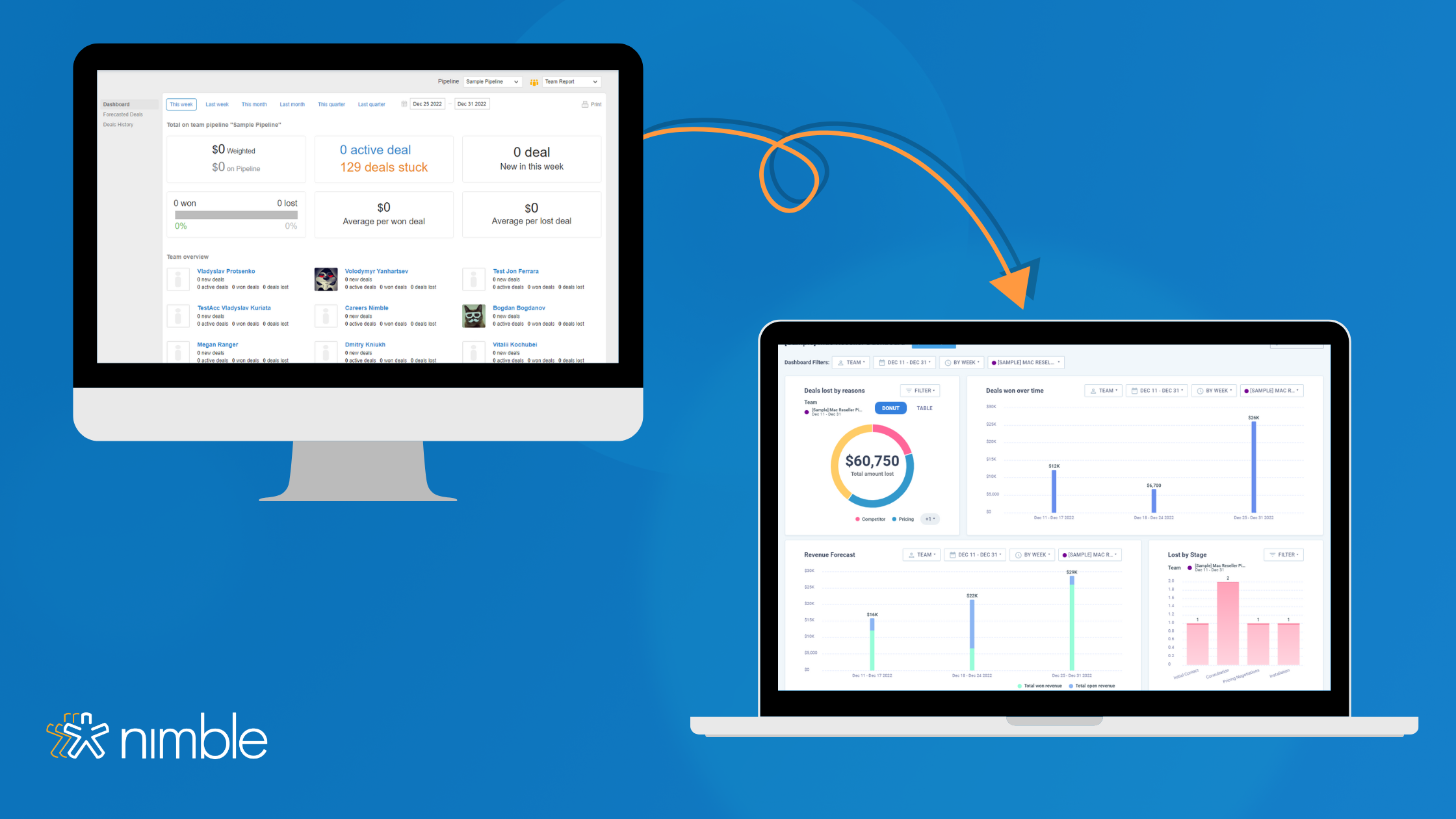 Take a deep dive into the reimagined User Interface of Reports which includes Multiple Dashboards, the ability to Build Custom Dashboards, view a Variety of In-Depth Reports, and the ability to Manage our Comprehensive Team Reports, as well as in-depth Individual Reports for our Solo Users!

Our new Reports UI has been crafted with ease of use in mind for our entire Nimble Community! Whether you are an established sales professional or you’re just getting started, Nimble’s Reports UI will provide you with everything you need to successfully generate in-depth reports and make better business decisions.

Tailor Reports to Your Needs With Multiple Dashboards

Your sales reports don’t need to be a “one size fits all”. That’s why we’ve created a Multiple Dashboards feature that allows our users to build various reports for different product/service pipelines and to manage separate sales regions/teams!

Multiple Dashboards can be used to compare the productivity of your sales team, determine which of your products/services are generating the most income, and much more!

In addition, Nimble has privacy settings that allow you to select who on your team can view and edit each dashboard.

Nimble’s filtering capabilities can be used in two different ways:

What use cases can be applied to Customizable Dashboards?

When creating a custom dashboard, users have the ability to add as many graphs as needed to achieve an effective result. Examples include:

Managing Multiple Pipelines- i.e. You may have multiple variations of sales cycles based on different products and/or services.

Nimble offers a variety of reports which can be formatted as bar charts, donuts, and tables that provide insight on conversion rates, deals won and lost, forecasted revenue, and much more!

Nimble users can add, delete, rearrange and combine multiple copies of any of these reports on seperate Custom Nimble Report Dashbaords to suit their business needs!

Be on the lookout for additional reports, such as Deals Leaderboards and Activity Reports!

Manage Yourself and/or Your Team

Whether you’re a solopreneur or part of a larger team, we know it’s not always easy keeping track of every sales detail, that’s why Nimble does it for you!

For team managers, Deals Reports provides a comprehensive report of the progress of each salesperson or of your company as a whole.

The launch of Deals Reports we’ve brought to you today is not all that’s in store for Nimble! On the contrary, this is just the beginning.

Be sure to look out for our second phase of Deals Reports, which will include additional Reports Widgets on our Today Page, the ability to generate Team Member Activity Reports, and Company Leaderboards!

We will also soon add Automation to Deals and Deals Templates!

Keep an eye out for upcoming Nimble Updates, and don’t forget to read about our latest updates by checking out our Product Updates Blog!

If you have any questions, please write to us at [email protected] or join one of our Nimble Onboarding and Best Practices sessions, held every weekday at 9 AM PT.

Julia Santiso
Julia is a Social Media Marketing Associate at Nimble. She graduated from Florida Atlantic University with a Bachelor's Degree in Marketing and a minor in Hospitality and Tourism Management. Things she loves include: anime, hiking, and her adorable cats!
See more posts from this author
Previous Nimble Introduces a Completely New Deals Pipeline to Help Your Business Grow
Next Accelerate Relationship Engagements with The New Nimble Workflow Automations