My CRM is Better Than Yours 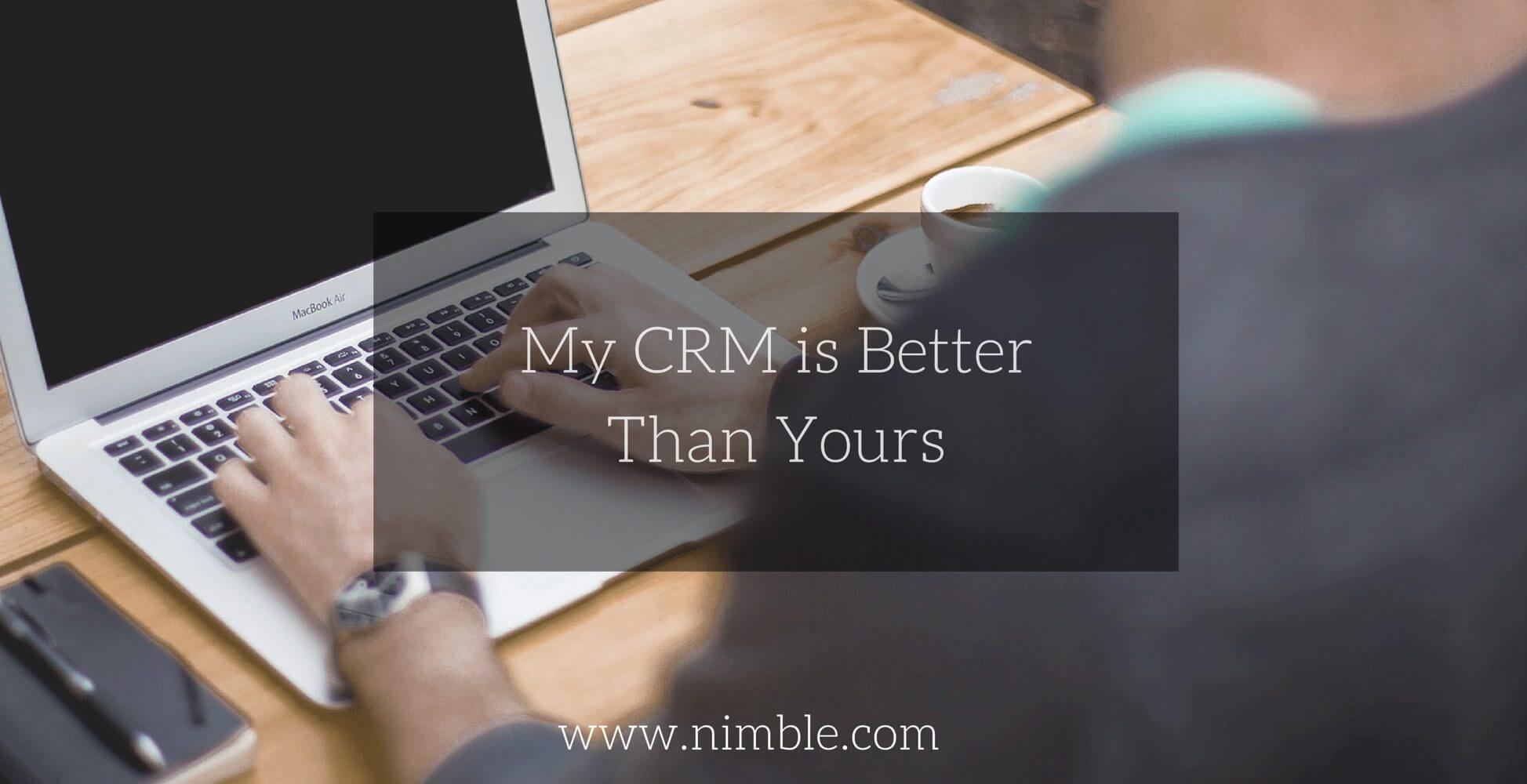 It’s 2009. I’m sitting at my desk in deep conversation with a man I’m humbled to be able to call my friend, Jim Cecil.

Many people recognize Jim as the grandfather of nurture marketing. Jim’s traveled the world several times over as a top speaker for VISTAGE, an elite organization of CEO’s. He’s also quietly credited with building an entire division of Microsoft back in the 80’s, among many other remarkable things.

On this particular call, having just returned home from a conference conducted by one of the major players in the CRM space, we were discussing the gap between CRM and Social Media. That’s when Jim said to me: “You have to chat with Jon Ferrara, he is doing something I’d like your opinion on.”

That something was “Nimble.”

At the time, I was spending my days helping businesses get more out of CRM apps like Salesforce, Infusionsoft, and Marketo…and my nights were spent on my own potentially world changing idea: “an app to turbocharge emails with video.”

So a conversation with Jon Ferrara was welcomed on two fronts: not only because I was a CRM consultant but also to make a connection with another fellow entrepreneur.

I’d done my research on Jon by checking out his company’s website and scrolling through his profile on popular social media sites. “And WOW!”

I discovered Jon was one of a handful of people who unified Contacts, Calendars, and Communications back in the 80’s into one unified platform commonly-known by its abbreviation “CRM” (or longer form description: Customer Relationship Management).

For those who don’t remember, before CRM this is how we got by:

Cringe. If only for the trees.

Uniting them together in one app was Jon’s first world-changing contribution to “sales”.

A couple of days passed until Jon and I spoke. Nimble was little more than a bold vision in prototype mode, but knowing Jon’s history gave his words extra gravitas. He took me through a compelling set of slides and then walked me through the app.

I remember saying, “You’ve taken on a MASSIVE CHALLENGE, but if you succeed…you will revolutionize the way businesses think about SELLING.”

Jon replied, “I’ve got 25 coders working around the clock in the room next door—on my own dime! I’m adding 10 more in the next 3 months. And that’s just the start!”

CRM apps have changed very little since their inception, and today they’re completing misinterpreting the role of Social Media in the selling process.

And this lack in understanding has resulted in sales teams awkwardly trying to jerry-rig the pieces together:

But anticipating this problem, Nimble started to integrate Social Media into a new and improved CRM platform.

For example, social data in Nimble is displayed in a contact’s profile, alongside the data you’re used to seeing like their name, phone, and notes you’ve taken.

What blows my mind though…Nimble began their mission to integrate Social Media into CRM almost a decade ago while the framework of social media was still being laid.

I Tip My Hat

Watching Nimble take shape in-front of my very eyes has been incredible.

So I jumped at the opportunity to be a guest author here on the Nimble Blog, because my goal — to modernize traditional sales techniques – lines right up.

[Note: Do you have a question or thought you’d to share? Perhaps a topic you’d like me to cover. Go right ahead — use the comments section below.]

Will Franco
Will's the creator of the Digital Handshake a sales technique that you can use to take new leads from 'luke warm' to 'red hot' instantly. He's also the Founder of jiveSYSTEMS, a triathlete, and lives in sunny Panama.
See more posts from this author
CRMCustomer Relationship ManagementNimbleNimble CRMsalesscrmsocial crmSocial Sellingsocial selling tips
Previous How To Choose the Right Seat at a Company Meeting
Next Join Nimble CEO Jon Ferrara and many special Social Selling friends