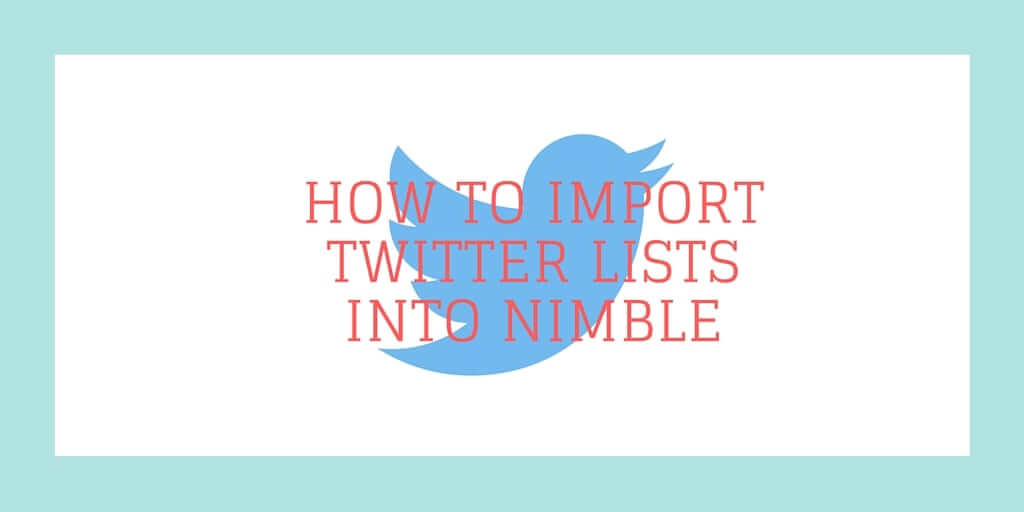 Twitter lists are curated groups of Twitter accounts. You can create your own lists or subscribe to lists created by others. Viewing a list timeline will show you a stream of Tweets from only the accounts on that list. Here’s more detailed info about Twitter lists and how to create them.

This post explains the benefits of using Twitter lists and how you can use them to prospect. You will also learn how to easily bring Twitter lists into Nimble to engage with prospects and industry influencers.

Simply put, Twitter lists allow you to be more efficient.

You can only follow a certain number of people before your Twitter feed starts to get messy. Using lists can help you to stay organized and focused on what you are trying to accomplish without getting distracted by irrelevant tweets.

A great way to get through the clutter and speed up your process is to create targeted lists. Here are some examples on what you can use Twitter lists for:

Create lists to stay top of mind with:

Creating your own Twitter lists is probably the best way to ensure that they contain only accounts that are relevant to certain topic and are of a great value at the same time. The problem is that curation is time-consuming.

A great workaround is to find Twitter lists that have already been curated by others and subscribe to them.

Identify the influencers in the areas of a promise of your product and go to their Twitter profile. There’s a big chance that they have already taken the time to curate highly targeted lists. Because these days, you demonstrate your thought leadership by sharing your experience and expertise with others, they will most likely have (at least some of) their lists publicly available.

Subscribe to Robert’s lists to find out who the hottest and most influential brands and companies in Tech are. He’s curated a list containing the Venture Capitalists & Angel investors in the Tech industry, a list of the most influential accounts and brands in Virtual Reality and Augmented Reality, a list of organizations that cover World news and outlets covering Tech news.

If you are interested in social media marketing, you probably know that SMExaminer organizes the annual Social Media Marketing World conference in San Diego, CA as well as an online conference called Social Media Success Summit. They only invite the top thought leaders in the industry to speak at their events and you can subscribe to their Twitter lists containing all the speakers from this and last year’s conferences.

Brynne’s lists are a great source of information about how sales professionals can leverage LinkedIn and social selling to grow their business. Subscribe to her lists containing speakers of some of the top sales conferences to stay informed about the latest trends in the sales industry.

Search for lists in Google

You can also run a Google search to look for Twitter lists. Just copy this formula into a Google search and replace Sales with any other topic that you are interested in.

Importing Twitter lists into Nimble is easy. Please follow the steps below and let us know if you have any questions at care@nimble.com.

Tip: For better organization, mark your import with an appropriate tag.