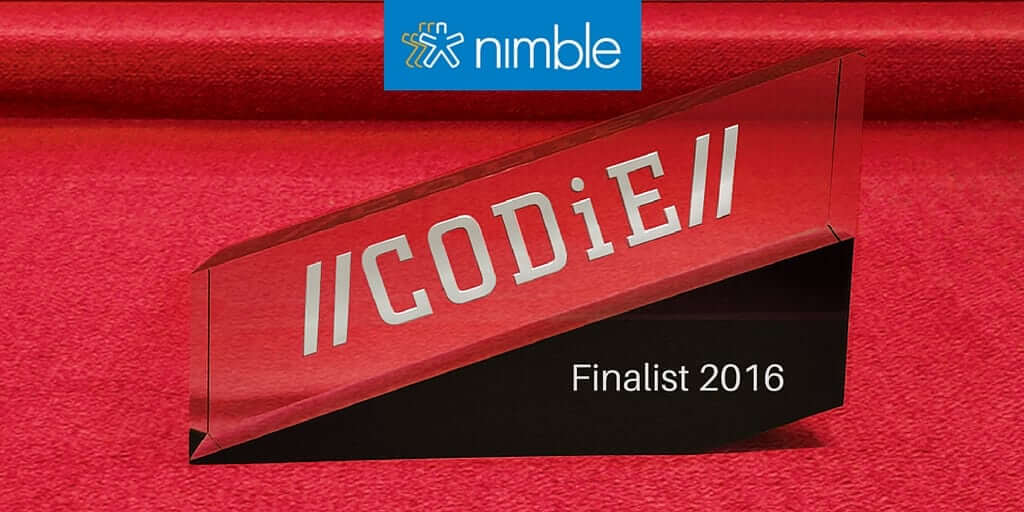 What’s particularly interesting — and one of the reasons that the news is such an honor — The CODiE Awards remain the only peer-recognized program in the content, education, and software industries so each CODiE Award win serves as incredible market validation for a product’s innovation, vision, and overall industry impact.

“Being recognized by the CODiEs is like an Academy Award nomination because it’s voted on by our software company peers”, said Jon Ferrara, CEO Nimble.

Nimble Leads the Market for Social Sales and Marketing CRM

The SIIA CODiE Awards were established in 1986 so that pioneers of the then-nascent software industry could evaluate and honor each other’s work. During the years that followed, the program evolved into three tracks (content, education, and software) and then further evolved into two (business technology and education technology) — but our core mission has always remained the same: recognizing excellence by honoring the software and information industry’s leading products and services. Award winners are able to leverage their CODiE Award as a prestigious representation of outstanding achievement and vision in the software and information industries.

SIIA is the leading voice for technology, data and media companies. Companies rely on SIIA to help drive innovation and growth of their industries through public policy efforts, in-person and online events and the protection of intellectual property.

Michaela Underdahl
Michaela is a Community Manager at Nimble. She is passionate about Customer Service, everything Social Media and growing our Nimble community. She tweets as @MichaUnderdahl.
See more posts from this author
CRM
Previous Your Marketing Plan Is Dead. Here’s How to Revive It
Next The importance of marketing: Does it really work for all niches?