5 Things All Employers Look For During An Interview 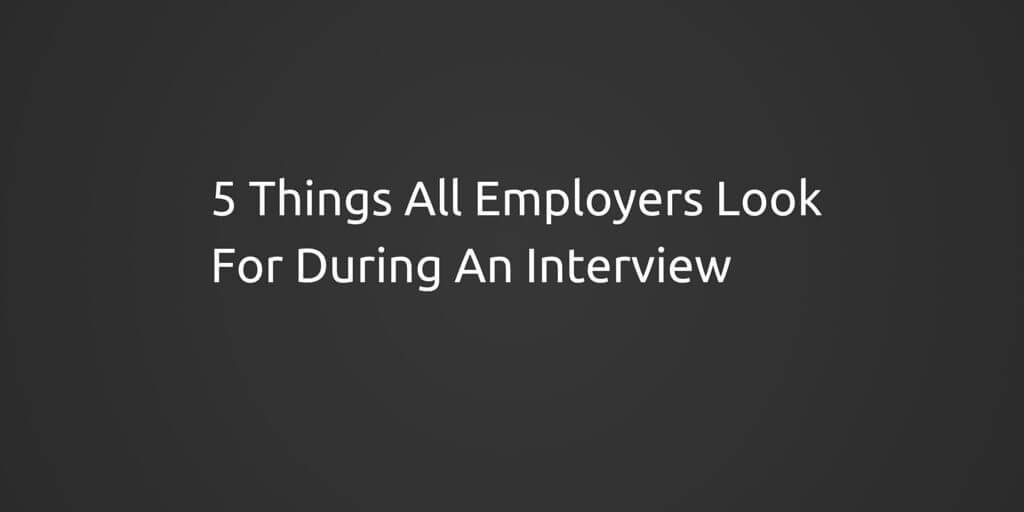 Job interviews are nerve-wracking and tense affairs, no matter the company that you’re trying to impress. No-one wants to make a mistake while impressing potential bosses, but at the same time you must show that you’ve got the right stuff to make the role a success, whether it’s an executive job in London, a post at Manchester Call Centres, or an office junior job in Brighton.Here are five points of interest that interviewers will be examining during the process.

If you arrive and admit: “Well, I don’t know much about the job really…” you may as well pick up your coat and walk out there and then. Both the job role and the company in which it will exist are ripe fruits to be harvested online, so do your research.

You should know the company, its customers and clients, and its competitors. You should know its products and services (and their costs), share prices, and some of its history.

Similarly, you should know the job responsibilities, the chain of command and what you will be expected to do. Don’t just think about what and when, also think about why, because the construction and explanation of the purpose of your job will really force you to explore it, and your findings will sound good on interview.

Even better, go prepared with ideas for how you can get hold of the role and take it further. This could exist in a number of forms, but essentially, a boss wants to see evidence that you would be a hard worker who fits in well with a team, and may even possess a little spark of creativity and ingenuity which will enhance the role and improve the overall business.

You may have created a list of questions that you think will be fired towards you, and prepared a superb set of answers. You might strike it lucky and these posers will exactly match the ones that appear.

More likely, however, the questions will range from something broadly in line to those you expected, to completely left-field and unexpected bombshells. But if you listen well and answer honestly then there will be a little leeway in most circumstances. If you have to ask for a few seconds to think of an answer, then do so.

A near-fatal error is to try to answer the question that you think should be asked, bending the conversation in your own way, perhaps with a series of buzz-words and clichés thrown in for correct measure. You have weaknesses and they may rear their head in the interview, but the trick is to reframe them as positives, not disregard them.

Be prepared, therefore, for questions on STAR (Situation, Task, Action, Result) and CAR (Challenge, Action, Result) scenarios, as described at youtern.com. Think about problems you have faced before, how you tackled them, and the eventual outcome. Note that the outcome may not even have been a success, but if you can prove that you took strong decisions that might not be a dealbreaker.

A little confidence is a good thing. Arrogant bravado and/or a dismissal of others is not, unless you can back it up. Equally, throwing out signals of incredible nerves and timidity won’t impress potential bosses.

Criticising former employers, or even worse current employers, can be frowned upon. Look at your current situation as a basecamp, a platform for you to move on to bigger things, and show the interviewer that you have been happy to work there – but it’s time to move on to somewhere better. This extensive list from Business Insider UK tells you many of the things you shouldn’t be doing. Learn them and don’t do them.

Debbie Fletcher
Debbie Fletcher is an enthusiastic, experienced writer who has written for a range of different magazines and news publications over the years. Graduating from City University London specialising in English Literature, Debbie's passion for writing has since grown. She loves anything and everything technology, and exploring different cultures across the world. She's currently looking towards starting her Masters in Comparative Literature in the next few years.
See more posts from this author
Previous 6 Content Marketing Hacks That Increase Sales
Next How Your Team Can Keep CRM Data Accurate