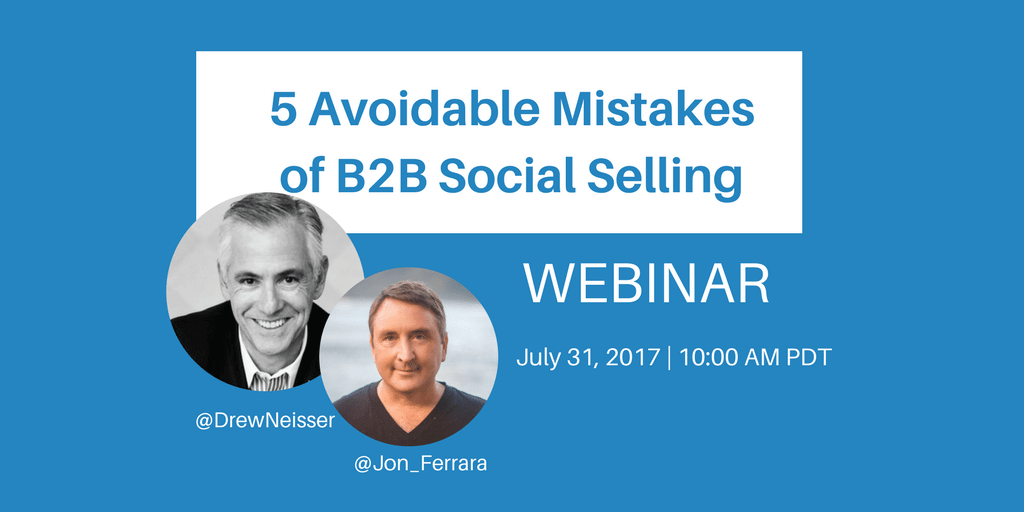 In the classic movie “Used Cars,” cynical salespeople compete to see who can close a deal the fastest. Using a dollar bill on a fishing line to literally reel in a prospect, Kurt Russell greets one unsuspecting man with the infamous line, “So, can we write it up?” This hard sell approach bemused audiences in 1980 and now it seems like a quaint glimpse of a bygone era.

Today, enlightened marketers realize 90% of decision makers never respond to cold outreach, and as such, they’re dipping their toes into the realm of social selling, which has quickly become a source of myths and misunderstanding.

To help debunk these myths and get brands on the right path, we have created a social selling training program, partnered with Nimble’s founder Jon Ferrara on two recent podcast episodes AND an upcoming webinar on July 31 (click here to register), and addressed five of the most common social selling myths in the post below.

If you’re new to the notion of social selling, you might falsely conclude that B2B buyers aren’t on social media. The truth is that 75% of B2B buyers now use social channels to research vendors. That means three-quarters of your prospects are checking out your company on LinkedIn, learning more about your culture on Facebook, watching your most interesting videos on YouTube and even tracking your newsworthy content on Twitter.

Given that roughly 14 people are involved in a B2B buying decision, measuring the impact of any single component of the marketing mix and the sales process is admittedly tough. Despite this hurdle, one study reported 54% of salespeople have tracked their social media usage back to sales, while another study noted salespeople who use social media exceed quota 23% more often than those who don’t. Add in sophisticated Account Based Marketing (ABM) tools, and social’s impact on your prospect’s journey is absolutely measurable.

B2B companies with hundreds, if not thousands, of prospects and an army of salespeople fear that social selling simply isn’t scalable. In truth, social selling can scale along with the growth of the sales force, assuming each salesperson is given a finite prospect list. Scaling is also helped by tools like Dynamic Signal’s VoiceStorm to help distribute content, Nimble’s social CRM platform to build prospect lists and DemandBase’s ABM system to track interactions.

Only seasoned social selling practitioners know that this relatively new approach is not instantaneous by design. In fact, social selling reflects the new reality that B2B buyers often spend up to nine months researching before they even contact a prospective vendor. Just like any other form of relationship building, social selling takes time, but the good news is that it is time well spent — 73% of salespeople who use social media as part of their sales process outperform their peers.

If your sales force is predominantly made up of millennials, you might assume these digital natives know the ins and outs of social selling. Wrong again, Pokémon breath! According to one research study, approximately one in four sales reps feel they know how to use social for selling and the results did not vary much by age group. The reality is that given all of the tools and potential time sucks associated with social selling, sales force training is a must regardless of age.

Drew Neisser
Drew Neisser is the Publisher of Social Media Explorer and Founder/CEO of Renegade, the NYC-based agency that has helped CMO’s find innovative ways to cut through since 1996.
See more posts from this author
Previous Nimble Launches Global Reseller Program to Address Growing Market Need For Simple Smart CRM
Next Top Tips for Building Your Brand on Social Media